Dustin Charles Lennep was located New Iberia Parish Detention Center and placed under arrest on active warrants held by City Court of Morgan City. He was transported to the Morgan City Police Department for booking and incarceration. 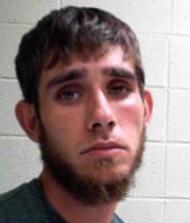 Officers were called to the Sixth St. to investigate a two-vehicle crash. Upon Officers arriving, they learned Robert J Gussman III was driving recklessly and crashed into another vehicle. During the crash investigation, Gussman III was found to be in possession of suspected marijuana. A warrant check revealed Patterson Police Department held an active warrant for Violation of a Protective Order. He was placed under arrest and transported to the Morgan City Police Department for booking and incarceration.