Chief James F. Blair reports that over the last 24-hour period the Morgan City Police Department responded to 48 calls of service. The following person(s) were arrested as the result beginning on 01/02/2020:
Bradford G Jones, 41 years of age, Address-Glenwood St., Morgan City, La., was arrested on 1/2/2020 at 10:00 A.M.

Bradford G. Jones was located at the St. Mary Law Enforcement Center and placed under arrest on active warrants held by the City Court of Morgan City. He was transported to the Morgan City Police Department for booking and incarceration.
Angie Renea Stanford, 53 years of age, Address-Dale St., Morgan City, La., was arrested on 1/2/2020 at 3:03 P.M.

Charge: Disturbing the Peace Intoxicated
Possession of an Alcoholic Beverage Container In Public

Officers were called to a business on Roderick St. about an intoxicated female causing a disturbance. When officers arrived, they came into contact with Angie R. Stanford who was causing a disturbance. Officers observed she was in an intoxicated condition and in possession of an open alcoholic beverage container. She was placed under arrest and transported to the Morgan City Police Department for booking and incarceration. 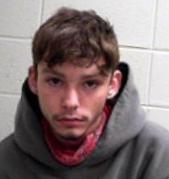 On January 2, 2020, Officers with the Morgan City Police Department initiated an investigation of a vehicle burglary. Officers learned a laptop and laptop carrying case was stolen during the vehicle burglary. Officers were able to locate surveillance footage in the area with the suspect in possession of the stolen laptop. On January 3, 2020, officers were able to locate Beau Snyder matching the description walking in the area of Egle St. and Federal Ave. During the investigation, evidence was revealed linking Snyder to the vehicle burglary. He was placed under arrest and transported to the Morgan City Police Department for booking and incarceration.