The D.A.R.E. Program for the Morgan City Police Department teaches drug and violence prevention. D.A.R.E. was founded in 1983 in Los Angeles and has proven so successful that it is now being implemented in 75 percent of our nation's school districts and in more than 43 countries around the world. D.A.R.E. is a police officer-led series of classroom lessons that teaches children from kindergarten through 12th grade how to resist peer pressure and live productive drug and violence-free lives.

Officer Carl Johnson
This email address is being protected from spambots. You need JavaScript enabled to view it. 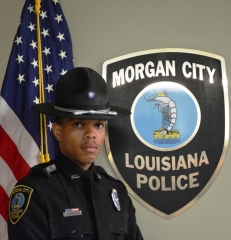