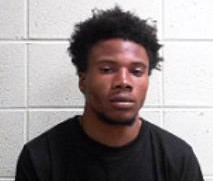 Charges: Attempted 2nd Degree Murder
Aggravated Obstruction of a
Highway Commerce
Aggravated Assault with a Firearm
Illegal Use of Dangerous
Instrumentalties
Possession of a Firearm in a
Firearm Free Zone

Investigators with the Morgan City Police Department responded to the area of Grizzaffi Street on Tuesday November 09, 2021 in regards to a shooting that had occurred. Investigators arrived and located one victim with multiple gunshot wounds. The victim was transported to an out of area hospital where they are listed in stable, but guarded condition.

investigators executed several search warrants in multiple areas during the course of the investigation.. Keith Garner Jr. was developed as a suspect. The St. Mary Sheriff's Office and Berwick Police Department assisted in the execution of these warrants.  According to reports, evidence was uncovered linking Garner Jr. as the shooter in the incident. Warrants were obtained for Garner Jr.'s arrest.

On November 11, 2021 @ 9:56 p.m. Keith Garner Jr. presented himself to the Morgan City Police Department. Garner Jr., was  arrested and booked on the active arrest warrants. He was jailed with bail set at $550,000 dollars.